Similar in taste, almost similar in functioning, but liquid in its appearance is the healthy derivative of tart cherries, known as organic tart cherry juice. The potion has almost all kinds of beneficial nutritional elements, as possessed by the parent fruit.

One of the unique traits of organic tart cherry juice is its anti-inflammatory properties, which have the following benefits for humans:

1. Pain-Removing Properties: The anti-inflammatory properties of organic tart cherry juice are similar to the action of drugs Naproxen or Ibuprofen, which have quick pain-alleviating actions. However, the liquid does not offer any side-effects, similar to the aforementioned chemical drugs.

2. Joint Benefits: After a certain level of age, the joints of the human body become affected due to a variety of disorders, the common one among which is osteoarthritis. The disorder leads to a breakdown in the joint cartilages and leads to immense pain in the body. According to clinical studies, Tart cherry juice is highly effective in reducing pain and inflammations that are caused due to arthritis.

3. Gout prohibition: Gout is a kind of disorder in the human body that is caused due to excess of uric acid secretion. The uric acid deposits in the body, forming highly painful crystals and leading to immobility of human joints. With researches, scientists have found that organic cherry juice could reduce the attack of gout in humans by almost 45 per cent.

4. Cardiovascular protection: According to researches, it has been reported that tart cherry extracts could help to reduce the harmful LDL serum levels, which is a base to diseases such as atherosclerosis and strokes etc. All these tend to be inflammatory disorders that further mar the functioning of the cardiovascular system in the due life course.

5. Muscle Protection: Almost a world-renowned fact and considered by researchers around the globe, tart cherry juice is an effective alleviator of pain and muscle soreness in the human body. If you have a habit of doing a daily work-out but feel immensely tired with muscle pains, you could use the organic tart cherry juice to alleviate such inflammatory muscle symptoms in the body.

6. Neurodegenerative Disorder Prevention: Some inflammatory neurodegenerative disorders may even affect the human brain and nerve cells, leading to disorders such as Alzheimer’s disease, Parkinson’s disease and dementia etc. However, all these remain suppressed due to action of polyphenolic compounds in the organic tart cherry juice.

Due to all the above functions, organic tart cherry juice has turned to be a daily-use product, which reduces the everyday inflammatory symptoms experienced by the human body. 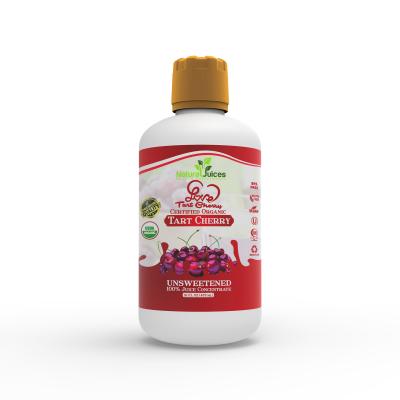